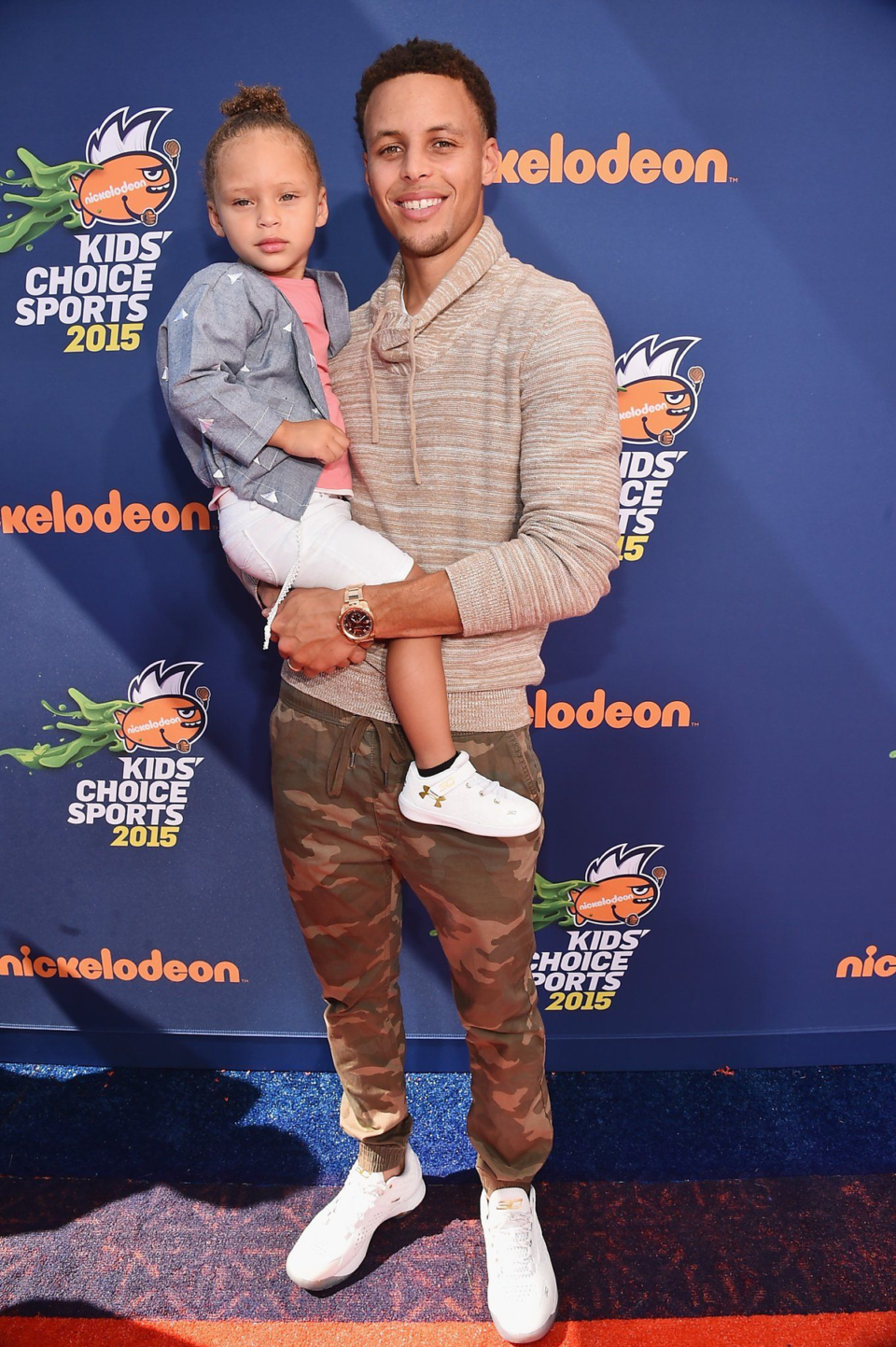 Riley Curry is an American child model and the eldest daughter of Stephen Curry. Her dad is none other than the globally recognized American professional basketball player for the Golden State Warriors. Let’s look into how she came into the public’s attention and some cool things that happen in the family home.

If his father Stephen Curry, who has been selected MVP of the NBA season multiple times, who managed to bring the Warriors back to the finals for the first time since 1975, Riley Curry (at 2 years old) was the undisputed star of a particular playoff. If you don’t know Riley Curry yet, it’s not too late. Stephen’s daughter revealed herself to the general public, gently disrupting the press conferences and with incredible ease, she doesn’t hesitate to grab the microphone to say whatever comes into her head ( “Make less noise, daddy!” ), walking around on the stage or playing hide behind the curtains or the podium, to the delight of journalists who (almost) only have eyes for her. Here’s the story of the celebrity toddler.

She first came to the public’s attention after she was born to Steph Curry, the most famous basketball player in the National Basketball Association right now and Ayesha Curry, a Canadian-American actress, celebrity chef, cookbook author, and television personality.

But her most popular appearance was when she stole the hearts of basketball fans around the world at the age of two years old when she made an entrance onstage during one of her father’s post-match press conferences on May 19, 2015.

Even though it looked like she was forced to participate in a couple of her father’s postgame press conferences in May 2015,she was determined to sit on her father’s lap, which he had to agree to, and while answering questions from reporters, she even asked him to “shut up” with a charming little giggle that stole her father’s attention

Riley Curry continued to greet reporters, speak into the microphone, and even ran under the table. The NBA later uploaded a video of her distracting the press on its social media pages, with the video garnering more than 3 million views.

Since then, Riley Curry has been stealing the spotlight again and again with each one of her appearances, for example, a few days later, on May 27, 2015, he once again jumped onstage during another of his father’s press conferences, this time to hijack the microphone to sing parts of Big Sean’s ‘Blessings’ with Drake in front of journalists. The NBA again shared another video of the incident on its official social media pages, with the video garnering more than 2.5 million views in weeks. Within a few days, 500,000 people tweeted about her and her stage appearances became memes and GIFs.

So it goes without saying that it has now become normal for fans to expect Riley Curry’s spirited performances during and after the game, just as they expect regular victories from the Warriors.

As recently as May 2018, after the Warriors’ Game 7 victory in the Western Conference finals, she was caught on camera exchanging a well-choreographed victory handshake with her father that involved eight steps from the handshakes, up to the sky.

She appeared on television with her parents for the inaugural episode of TLC’s ‘Playhouse Masters’ in August 2016, which we will get into below.

4. Riley Curry was on ‘Playhouse Masters’:

Riley Curry, at the age of four, starred with her family in the first episode of the TLC series ‘Playhouse Masters,’ which premiered on August 23, 2016.

During the show, the hosts built her a playhouse designed especially for her. While she was already a proud owner of a decent gaming house, her new gaming house will put many royal houses to shame. She was one of the stars on the show, which also had episodes about the children of actresses Ali Landry and Alana de la Garza, as well as Washington Nationals baseball player Ryan Zimmerman.

‘Playhouse Masters’ is the creation of husband and wife business partners: Tyson and Audy Leavitt, who also own a family business that specializes in creating custom buildings for clients.

On her fifth birthday, Riley Curry’s mom shared on Instagram pictures of her unicorn-themed birthday party complete with a unicorn bounce house and also a unicorn-themed tea party area.

While Riley Curry may seem too young to spark controversy and too cute to raise eyebrows, after she repeatedly began hijacking her father’s press conferences, some raised concerns that she was too comfortable and nonchalant to interrupt serious events such as a press conference and criticized her parents for allowing her to do so. After this, his mother issued a response stating that it was important to let children be children and that there was nothing wrong with being a parent, even during an event with people watching.

Riley Curry is the first child of her parents and has a sister named Ryan (born July 10, 2015) and a brother named Canon (born July 2, 2018). Interestingly, all three siblings share the same birth month.

Seven years after taking his daughter Riley with him to a press conference, Stephen Curry has taken a step back and probably wouldn’t do it again today.

The 2015 Finals were those of the consecration of the Golden State Warriors and Stephen Curry but it is also famously noted for when a small family member of the double MVP had also appeared in the spotlight, his eldest daughter Riley.

The naturalness and ease of the little 2-year-old girl had a lot of fun on the networks and had triggered a wave of memes and humorous messages to her glory. Now 9 years old, the sister of Ryan and Canon Curry is much less exposed by her parents.

What the parents call a concerted decision between Ayesha and Stephen, a little scared of the attention given to their child.

In an interesting interview with The Undefeated, the All-Star point guard explained this, saying: “It’s about figuring out how to raise our kids in this crazy society that we live in and where we’re so visible, with people following your every step and every word. If there’s one thing I regret, in a way, is that I took Riley to a press conference with me so soon. I’ve always wanted to share my job and my experiences with my family. But I didn’t know what proportions it would take and the effect I wouldn’t do it again, I don’t think, because I want to give my children the best chance to succeed and see the world through their own eyes, in the right way, to respect them and not to be big-headed thinking that everything revolves around them, and it is crazy to think that I have to teach them that when they are 6 years old, 3 years old and 7 months old”.

Riley now generally stays in the stands with her mother and grandparents, which apparently doesn’t stop her from being just as comfortable as ever.

8. Riley Curry is an NBA favorite since going viral:

Riley Curry made three NBA Finals appearances before she turned five and watched her father win back-to-back MVP awards with a unanimous vote.

And there is no doubt that Riley Curry, who already perfectly imitates the celebration of the father, will still offer us a few moments of grace that will, for sure, delight the Internet, where she has already become a star.