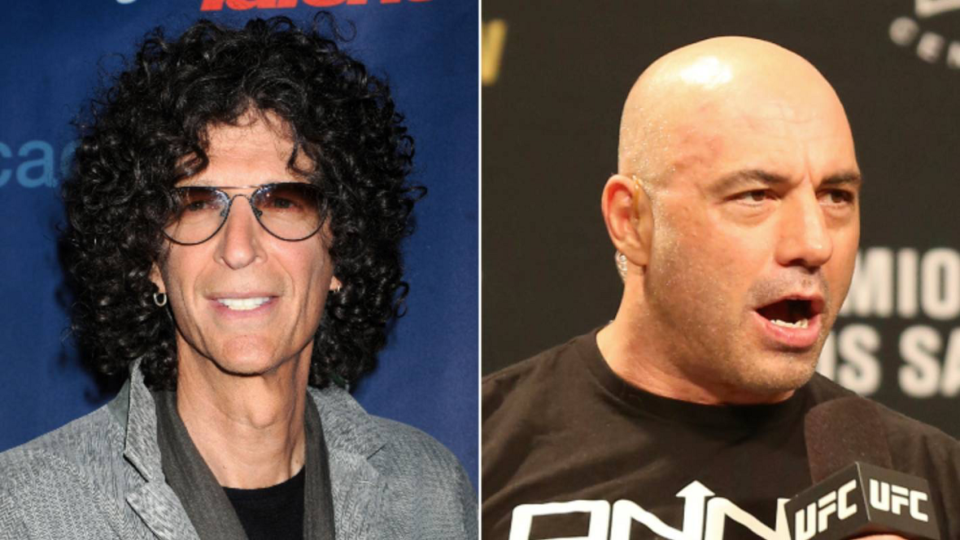 Thoughts of Howard Stern on Joe Rogan’s cancellation have become public since the start of the year. Speaking on his personally directed SiriusXM radio show in January 2022, Howard Stern said he doesn’t believe in censorship and expressed a level of admiration for Rogan’s podcast empire which we will cover in this article. With that being said, let’s get started with the story of Howard Stern and Joe Rogan.

Howard Stern on Joe Rogan: Against Cancellation By Spotify

According to the media, Rogan struck a $100 million deal with Spotify to bring his personal podcast over to the platform that has millions worldwide. In light of this initial success, Howard Stern stated that “everything comes down to money in the media business”, and that he was “happy for any young man or woman who can get paid in show business because so many people do not get paid. So those that can, god bless. It ain’t easy. It’s not an easy road. And attracting an audience is not easy.”

But the two of them have some animosity:

Not only did Howard Stern slam Joe Rogan for spreading misinformation about the COVID-19 vaccine, he also admitted that the two of them have parted over the years. Howard Stern stated in an interview with Mediaite that: “I don’t listen to Joe Rogan. I know Joe from 100 years ago,“We’re no longer friendly. We were friendly at one point — I just knew him as the funny guy, as a comedian — I knew him before he was on ‘Fear Factor’ actually. I know that his podcast is very popular, they say… I am for any performer who can get any money and get paid.

“I don’t want to see Joe Rogan canceled…everything in this world comes down to money”, stated the other podcasting/radio legend. According to statistics revealed by Sunny Hostin from The View, Rogan has garnered around 11 million listeners in addition to getting a $100 million contract, as of 2020”.But the podcast which “needs to have some sort of guidelines or a disclaimer on his podcast stating: this is misinformation”, was removed while an official reason was never announced. According to the media, Spotify removed 42 episodes of “The Joe Rogan Experience” from its platform in April 2021 and Sunny Hostin from The View suggested that “removing some of the podcasts that disseminate this misinformation” would have been enough.

What are Joe Rogan’s thoughts on his cancellation?

Most interestingly, the podcaster vowed to try to ” better balance controversial opinions” on his show, perhaps acknowledging some of the criticism he received. Joe Rogan even agreed with Spotify’s announcement to add links to factual information in Covid podcasts and scientifically based.

Rogan, 54, has millions of fans who appreciate his outspokenness, his iconoclastic ideas and the motley people he invites to his shows. His program The Joe Rogan Experience often sees the entertainer, with a glass of whiskey in hand, chatting informally for two or three hours with a guest on topics as varied as flying saucers, psychedelic drugs, red meat, trending topics, finance or fitness, slipping in expletives here and there, just like during a conversation between friends. With that, comes some controversy because at the end of the day, the podcast is not a private event between friends, it is being broadcast to millions. And the people are not friends – they are clients we can say. Rogan was already known when he started his program in 2009, as he has a career as a standup guy, star of television series, host of the reality show Fear Factor and commentator on martial arts combat. Personalities from all walks of life have crowded in front of his microphone. In 12 years, it has hosted nearly 1,000 guests — 88 percent men, according to the JRELibrary site — including Tesla founder Elon Musk, who smoked a joint on the show; Edward Snowden, the former NSA analyst who released secret documents about US espionage programs; or the filmmaker Oliver Stone.

Media Matters points out that during the pandemic, Rogan spread false information about the coronavirus on numerous occasions : he said that “if you are 21 years old and you ask me if you should get vaccinated, I would say no” ; She assured that the quarantine “makes things worse” because people “are trapped inside and that is where it is transmitted” and has also promoted the use of ivermectin (an antiparasitic for animals) against covid.In addition, the comedian opposed the sanitary pass because, he argued, it puts the United States “one step closer to the dictatorship.”

Rogan also has a history of outrageous comments. According to the Media Matters investigation, the driver assured that “men who transition to women use masculine tactics and behaviors while invading feminist spaces.” A direct victim of his attacks was athlete Fallon Fox, who in 2013 became the first openly transgender athlete in mixed martial arts. “She’s not really a she,” she said.

Folk legend Neil Young and singer Joni Mitchell pulled their music out from Spotify to voice their disagreement with the podcast. Both musicians accused him of spreading false information about the vaccination for the Coronavirus. In addition, for her part, the singer India Arie emphasized the presenter’s “problematic” statements on “the racial issue.”After the Canadian musician’s request to Spotify, the company issued a statement in which it regretted Young’s decision and assured that they have “precise policies on content” and that they have “removed more than 20,000 podcasts related to covid since the beginning of the pandemic.”Last year, Spotify CEO Daniel Ek said during an interview that the company “has no editorial responsibility for Rogan”, following which the comedian commented with zero response.

Liberal (Joe denies being an ideologue or even voting for the right):

Politically, this atheist and supporter of gay marriage, the decriminalization of soft drugs and firearms, identifies as a liberal and even considered supporting leftist Senator Bernie Sanders during the last Democratic primaries.”I’m just looking to argue with people who have different opinions. I’m not interested in talking to people who all have the same perspective,” he said in a video posted on Instagram after Neil Young’s criticism.Rogan has also given a voice to climate change skeptics, conspiracy theorist Alex Jones and, since the start of the pandemic, figures from the anti-vaccine movement, earning him the progressive website Media Matters for America to call him a “megaphone” of the lies of the extreme right”.

The most controversial podcast:

When a group of 270 medical experts sent a letter to Spotify warning of the danger of keeping Joe Rogan in a crisis health scenario, it was a big controversy because The Joe Rogan Experience creator assured young people that they did not need to be vaccinated against the disease.In another episode, he invited Robert Malone, who was banned from Twitter for spreading false information about the coronavirus and who went so far as to claim that millions of people were hypnotized into believing that vaccines can stop the disease.

How did Rogan get his claim to fame?

The Joe Rogan Experience creator has accumulated a long career. Touted as a stand-up comedian in US comedy clubs, he soon worked as an actor in TV series, movies like ‘Zookeeper’, and as a presenter on television shows like NBC’s reality show Fear Factor, where the contestants ate worms, flies and covered themselves in snakes. Joe was a commentator for the UFC martial arts fights, among some of his many projects.In 2009, he started a live program on his website called ‘Joe Rogan Experience’, which was only seen by a hundred people with no type of censorship introducing his anarchic, brazen, and limitless style for guests who can express themselves however they want about whatever they want.The Joe Rogan Experience space talks and rambles about everything, from hallucinogenic mushrooms, of which the podcaster declares himself a habitual consumer, to marijuana, going through neurology, psychiatry, medicine, and, of course, politics where he reels off strong criticism against the Democrats.With this formula, in the midst of Trump’s controversial mandate, where the culture of cancellation and the debate on the limits of freedom of expression proliferated, Rogan managed to make ‘The Joe Rogan Experience’ the most popular podcast on Spotify globally in 2021 with an audience of 11 million people.