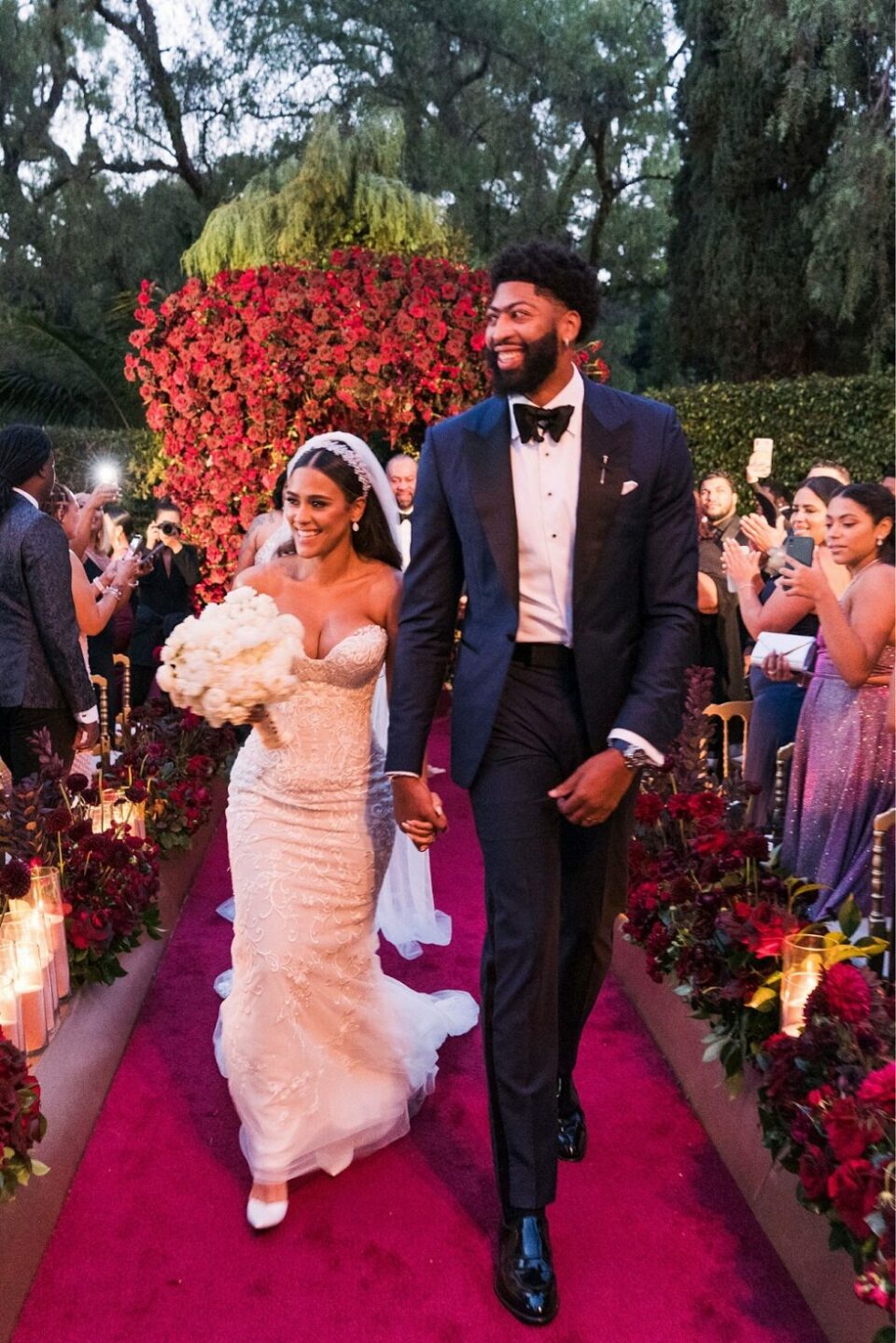 After just one year of college basketball, Anthony Davis was able to obtain the Grand Slam of men’s college basketball. The man entered the NBA in hopes of replicating his success on the high school stage. The five-time NBA All-Star, three-time All-NBA First Team, and three-time NBA All-Defensive Team member, have achieved a lot of accomplishments but does a marriage count as a success story? Let’s take a look at who Anthony Davis’s wife is.

Who Is Anthony Davis’s Wife? 4 Things About His Marriage To Marlen P!

1. During their wedding dance, A Davis didn’t let go of Marlen P:

According to the footage from Tim Frazier, during dances and songs, Anthony Davis did not detach a second from his bride which remains as one of the social testimonies of the ceremony and party. The one time A Davis went solo was during one point during the evening when he allowed himself a dance on stage in front of everyone with a glass in hand! A wedding in which talent was the heart of the party, Anthony Davis wowed his guests as a singer and dancer. This was something he unleashed only a handful of other times in public.

2. At their wedding, one special guest was their daughter:

Marlen and Davis opted not to update their social media with updates.

While there was footage of their wedding, the Lakers star seemed to prefer to keep his nuptials private, but there is a clip of Daivs kneeling on his knee, singing Case’s “Happily Ever After” to his fiance at a dinner rehearsal (prior to their actual wedding) accompanied by their only child and daughter, Nala.

3. LeBron attended and so did other A-list stars:

It seems that Anthony Davis’s teammates showed fans clips of their amazing wedding. Among the guests, LeBron James graced the wedding, together with more Lakers and Pelicans teammates. In terms of social media, LeBron James shared only one story: in the car, while he was heading to the ceremony, with a special companion sitting next to him in the car: Russell Westbrook

There will also have been other players at the ceremony but one of the most iconic photos taken of the guests on social media was the photo of James, Westbrook and Dudley, who obviously couldn’t miss the wedding of AD!

Anthony Davis, who now has a wife, has been connected to a number of beautiful women prior to getting married. After being rumored to be dating a basketball buddy, Brittney Griner, who later revealed she was gay, Davis was quick to switch to gorgeous Dylan Gonzalez.

American basketball player and former player of UNLV, Gonzales is a student-athlete in basketball, volleyball, and track and field at the University of Nevada, Las Vegas. She is much younger than the NBA All-Rookie First Team member, having been born on December 9, 1994. Gonzales and Davis began dating in the summer of 2013. It is unclear how long the couple dated before choosing to end their relationship.

After that relationship, he moved on to his now wife, previous girlfriend, Marlen, who he reportedly began dating in 2017. The couple has a daughter named Nala together.

The NBA star was born Anthony Marshon Davis Jr., as one of the three children of Anthony Davis Sr. and Eranier Davis, on March 11, 1993 in South Chicago. From a very young age, Davis learned to play basketball, playing almost every day with his father, uncle and cousins.

Raised in South Chicago, Davis played in Perspectives Charter High School, which is a member of the Blue Division of the Chicago Public High School League. He remained practically unknown to insiders until 2010, also due to his short stature, he was discovered in the spring of the same year after a sudden growth and a series of exhibition matches in Amateur Athletic Union, and immediately considered by scouts as the best high school player in the nation.

Davis didn’t draw attention to his game until his senior year when he played AAU basketball and also appeared in the Nike Global Challenge. After his performances that attracted the title, colleges such as Syracuse among many others offered him a scholarship. Davis, who at the time was serving as a guard watchman, was getting involved in Kentucky amidst a great turmoil that his father had been asking for money from colleges. He averaged 32 points, 22 rebounds, and 7 blocks in his final year before college, earning the USA Today All-USA High School Basketball Team First Team, Parade All-American First Team, and SLAM Magazine First Team All-American selections among many others.

Going to college, Anthony Davis was billed as the next big thing even before he bounced a ball. He went on to lead his team to a perfect 16-0 record at the back of 14.2 points, 10.4 rebounds and 4.7 blocks per game on average, after which his team lost in the regular season championship. of the SEC conference.

At the end of the 2012 NCAA championship, Davis declares himself eligible for the NBA draft, where without any surprise he is selected as the first choice overall by the Pelicans. He made his NBA debut against the San Antonio Spurs on October 31, 2012, scoring 21 points and 7 rebounds. On November 2, 2013, on the occasion of the home win against the Charlotte Bobcats, he achieved 6 steals and 6 blocks on the scoresheet, a feat previously only achieved by Elvin Hayes, Hakeem Olajuwon, David Robinson and Andrej Kirilenko. He finished the season with 13.5 points, 8.2 rebounds and 1.8 blocks per game, finishing second in the race for the Rookie of the Year award, won by Trail Blazers guard Damian Lillard.

On July 15, 2019 Davis announced his absence from the World Cup in China to join the Los Angeles Lakers who picked him on June 16, 2019, in exchange for Josh Hart, Lonzo Ball, Brandon Ingram, the fourth pick in the first round of the 2019 Draft.

A versatile and dynamic player, he is able to cover both the role of strong forward and center. It is decisive both in the offensive phase, during which he makes use of his remarkable repertoire in the low post, and in the defensive one, both in the rebound and, above all, in the blocks, statistics in which he was the best in the NBA in the 2013-14 seasons, 2014-15 and 2017-18. Precisely by virtue of these characteristics, he is considered one of the best players in the NBA and one of the best big wings ever – but does Anthony Davis’s salary match this statistic?

New Orleans First Global Draft Pick The Pelicans in 2012 signed a three-year $ 16 million guaranteed contract with the team that gave them an average annual salary of approximately $ 5.33 million. When the deal expired, he signed a brand new five-year contract worth $ 127 million to extend his stay with the team. This means that he has been taking home about $ 25 million in salary since 2015.

Anthony Davis has a twin sister named Antoinect who is only a minute older. Not much is known about her, unlike her successful brother whose spotlight is much larger than her. It is unclear whether she chose to play basketball like Anthony and their older sister Iesha, who also played at Daley College.

Other Facts About Anthony Davis’s Success:

Lance Archer: 10 Facts About His Career (From Basketball To AEW)!