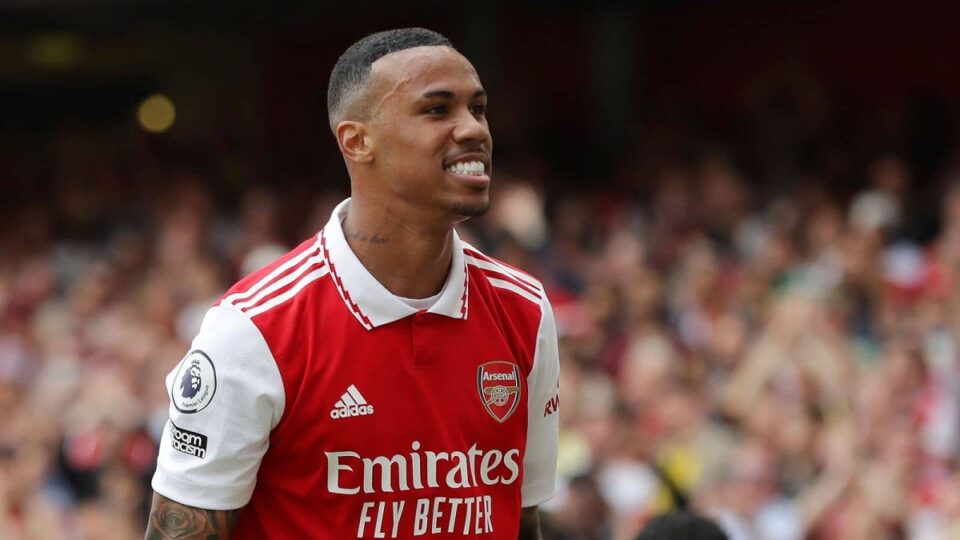 Gabriel Magalhaes: All You Need To Know

Who is Gabriel Magalhaes?

The young Gabriel Magalhaes is a Brazilian professional football player. Namely, he was born on December 19, 1997, in Sao Paulo (SP). The defender who burst onto the scene with the Brazilian football club Avaí, currently plays for Arsenal, from England.

How did Gabriel Magalhaes start his football career?

Initially, the future defender of Arsenal and the national team began his career at Avaí, still in his childhood. Later, the boy moved to Florianopolis, where he went through several youth teams at Leao da Ilha.

However, Gabriel Magalhaes grew into his game quite rapidly and became a real promise in his training club. With that, the defender competed in the 2016 Cup for the Santa Catarina club. Later, with the main squad, he reached the long-awaited title in the team that played in Serie B.

Despite this, he ended the year in the Leao da Ilha reserve. But, at that time, the defender already aroused the interest of the ball market. In this sense, the rumors involving both Brazilian and foreign clubs began to roll.

Initially, Gabriel Magalhaes matured and became one of the great promising players of Avaí. With that, the club that signed the first contract with the defender in 2016, extended the bond until December 2018. At the time, the player who was already having ballot market surveys, chose to join Leao da Ilha.

Namely, in his first season in the professional leagues, the footballer played in 39 games. Along with this, he also received the first call-up to the Brazilian under-20 team. However, the year ended with Gabriel Magalhaes on the bench.

Consequently, the youngster started getting lots of offers during the transfer window. In this sense, there were many rumors coming mainly from England. Certainly, the European transfer market showed a lot of interest in the young promise of Brazilian football.

Therefore, the player became very well known in the hectic transfer market. But not only European teams have submitted proposals for the defender. At the time, there were many rumors about the interest of clubs such as Flamengo and Palmeiras.

Did Gabriel Magalhaes play in France?

During the opening of the 2017 transfer window, Gabriel took his first step toward European football. Namely, the defender was bought by Lille, from France, for 3 million euros. But, for not having been able to establish himself at first, a few months later the player was loaned.

So he went to Troyes, also from France. After the end of his loan to the French side, the Brazilian ended up at Dinamo Zagreb, a Croatian club. However, on his return to Lille, Magalhaes finally found stability.

Certainly, Lille’s coach, Christopher Galtier, played an important role in Gabriel’s good results. After finishing the season on a high in the French Ligue 1 team, the player began to attract the attention of European giants. Big English names like Manchester United, Everton, and Chelsea, were reportedly interested in signing the Brazilian defender. In addition, there were rumours involving Real Madrid from Spain, and Napoli from Italy.

How did Gabriel Magalhaes reach Arsenal?

Despite all the competition, during the 2020/21 transfer window Arsenal managed to get the defender to England. In this way, the club paid 25 million euros to guarantee Gabriel in its squad. Namely, the athlete’s contract with the English is for five seasons, until 2025.

In fact, the player, hired as the club’s great hope, is increasingly establishing himself in his position. At 24 years old, Gabriel Magalhaes was the absolute starter of the London team last season. He started all 38 games for Arsenal and scored five goals.

Definitely, the Brazilian defender is coveted by many giant football teams. For example, Juventus, from Italy. According to the European press, the Turin team is very interested in having the player as part of their squad.

How has Gabriel Magalhaes been with the Brazilian national team?

At the same time that he began to attract the attention of the transfer market in Avaí, the young defender had his first opportunity in the Brazilian National Team. In this sense, Gabriel was summoned to play for the under-20 squad.

But, in addition, Gabriel Magalhaes was also with the Brazilian team at the Tokyo Olympic Games, in August 2021. Namely, in the men’s tournament, Brazil won its second Olympic championship.

After that, a few years later, it was time to represent the main cast. Therefore, in November 2021, Magalhaes was called to help the team led by Tite in the final stretch of the South American Qualifiers for the Qatar Cup. On the occasion, the player was called to fill the vacancy of Lucas Veríssimo, who was injured before the games began.

Finally, despite not being one of the strongest names in Tite’s group, the defender is practically guaranteed a spot in the Qatar World Cup.

Did Gabriel Magalhaes win player of the month at Arsenal?

Brazilian defender Gabriel Magalhaes was named Arsenal’s best player of September. The 22-year-old was in his first season at the club and was chosen as the player of the month by the club’s fans. He had 72% of the votes and was ahead of forward Lacazette and winger Bellerín.

Gabriel played just two of Arsenal’s four games in September. He was in the 3-0 win against Fulham, when he scored a goal, and 2-1 against West Ham. The defender was on the field twice for the club, in October. The young ex-Lille player celebrated the recognition.

Success in the networks and “Brazilian community” marked Gabriel Magalhaes’ arrival at Arsenal. “I cannot deny that it really is a prize that fills me with happiness and confidence. Starting this way makes things easier. I’m still looking to improve my adaptation and I think I still have more to present. The ball out is something that I work on a lot and it is important to have these numbers valued by the fans. I will pursue big things, individually and collectively. I have a lot of confidence in that,” said the Brazilian.

Gabriel arrived at Arsenal earlier that season. The Gunners paid 26 million euros to Lille for the Brazilian, who was also wanted by Everton and Napoli. With his formative years spent in Avaí, the defender cites the importance of coach Mikel Arteta in his good adaptation to the club. “Arteta gives me a lot of confidence and always tries to talk to me about positioning and the importance of the ball out for the functioning of the team. I was very well received and this also facilitated the beginning of the walk,” said Magalhaes.

How did Gabriel Magalhaes perform at Lille?

The young defender Gabriel Magalhaes attracted the attention of a lot of European clubs during his stint at Lille. At 22 years old, the Brazilian was one of the highlights of Lille and was widely expected to be bought by a big name European club during the transfer window. According to the president of the French club, Gerard Lopez, he was expected to leave France soon and join a “potentially big” team.

“He’s an absolute machine, so for me, he’s on his way to a potentially big club. It’s true that he would like to try something else. We haven’t made that decision yet, but he’s received a number of offers. one club than others, but nothing has been done yet, so we’ll see,” Lopez said in an interview with Sky Sports

The former Avaí player had ​​already aroused interest from two clubs in the United Kingdom and from “others who asked or put forward proposals for him”. But the president said that he was in no hurry to do business, as football is now paralyzed by the coronavirus.

Lopez was full of praise for Gabriel and believed that his player is undervalued in the world of football. In addition, he stated that in a short time he would wear the shirt of the Brazilian National Team.

“I feel he is among the top five dominant defenders in Europe at the moment. His statistics, which are not well covered outside of France, show that his duel winning percentage is quite unknown in an extremely physical league. is on his way to the Brazilian team at some point,” Lopez added.

Why was Gabriel Magalhaes dropped from the Brazilian National team?

The CBF (Brazilian Football Confederation) announced that defender Gabriel Magalhaes, from Arsenal, and striker Raphinha, from Leeds, were removed from the squad for the games against Chile and Bolivia, in the last two rounds of the World Cup Qualifiers. With that, Tite called Felipe, from Atletico de Madrid, to replace the vacancy in the defense. The striker’s replacement was yet to be defined.

According to the CBF statement, Raphinha needed to be cut because he tested positive for covid-19. Therefore, he was following the isolation protocols in England, prevented from traveling to Brazil and participating in the period of training and games that began in the next few days.

Gabriel Magalhaes, in turn, did not have any health problems. The 24-year-old Arsenal defender had asked to be excused to attend the birth of his first child, due next week. He spoke with the team’s technical coordinator, Juninho Paulista, and with coach Tite, who were understanding and released the athlete from national duty.

Gabriel’s replacement in the squad list, Felipe had been summoned for the last time in June last year, for the Copa America tournament. At the time, listed only in the first round of the continental tournament, he ended up cut because he suffered a muscle injury and was replaced by Leo Ortiz.

Trained by Tite when he was at Corinthians, the 32-year-old defender was in his third season at Atletico de Madrid. In recent games for the Spanish team, he had been on the bench.

Brazil squared off against Chile at Maracana. Then, the team had to play against Bolivia, in La Paz, on the 29th.

Why is Gabriel Mgaalhaes’s spot guaranteed on the Brazilian national team?

Despite not being the most highly touted defender on the Brazilian team, Arsenal defender Gabriel Magalhaes is almost guaranteed a spot in this year’s World Cup roster. That’s because, the athlete is seen as the ‘fourth defender’ of the selection, displacing names like Felipe and Lucas Verissimo, who unfortunately suffered a serious injury last year.

And, despite being little known by Brazilian fans, the defender has been having a great performance at Arsenal, where, at just 24 years old, he is a perennial starter and has already scored four goals this season.

These exhibitions have been causing some clubs to show interest in their football and for the next season, the Brazilian may end up transferring to one of the bigger teams in European football.

Is Gabriel Magalhaes headed for Juventus?

According to Italy’s Tuttosport, Juventus are extremely interested in signing Gabriel Magalhaes, seeing the Brazilian as the ideal replacement for Giorgio Chiellini, who last week announced his departure from Vecchia Signora. However, the deal should be difficult for the Italians, given Gabriel Magalhaes’ contract runs until 2025 with Arsenal, in addition to his valuation in the market, which can raise his price up to 50 million euros.

10 Ben Askren Facts To Check Out (Plus 1 Controversial Fact)