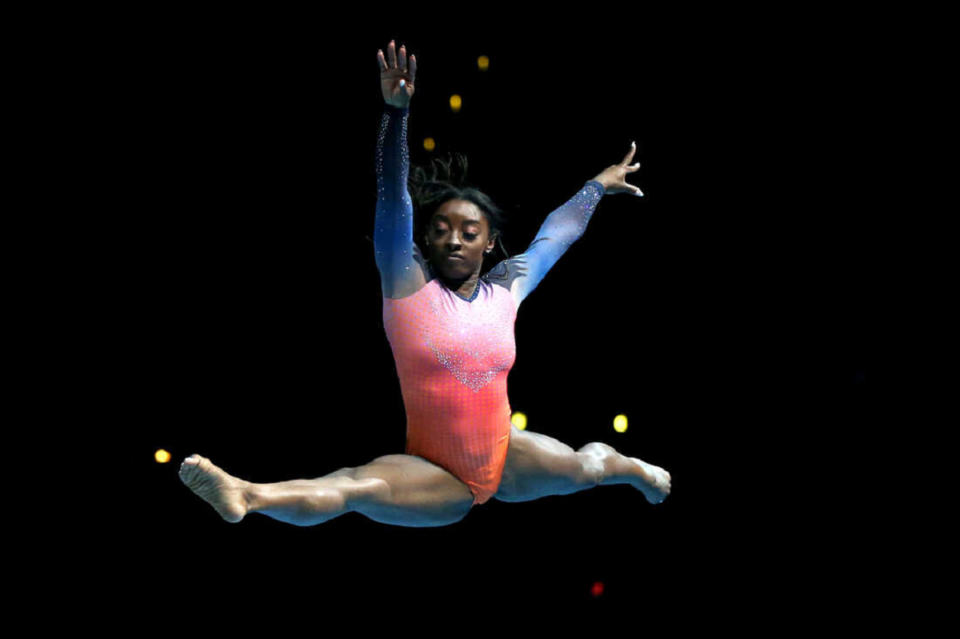 She whirls through the air with a lightness that has never been seen in this spectacular way. Even for a sport like gymnastics which involves the human body being used in ways never seen elsewhere, Simon Biles is a true standout. She has done moves that weren’t even imagined by gymnasts before her. Her success has allowed her to earn a sizable chunk of money as well. In this post, we will talk about the extraordinary gymnastics career of Simone Biles, her net worth, and even some darker parts of her life. Let’s get started.

Simone Biles Net Worth: All You Need To Know

What kind of gymnast is Simone Biles?

Again and again, Simone Biles has to answer the question of what goes through her head when she takes off on one of those jumps that seem to break all the laws of gravity. About the triple tucked double somersault, which entered the gymnastics vocabulary as “Biles II (J)” after her first appearance at the Stuttgart Gymnastics World Championships. “Nothing,” she then replies and smiles. “The colors of the hall ceiling, the audience, and the floor blur into each other. Then I land. That’s it.” Other gymnasts count while flying in order not to get lost. “Simone doesn’t need that, she always knows where she’s flying,” says Biles’ former trainer Aimee Boorman.

Some sports journalists have praised her for having “more bounce than Michael Jordan” while being “more dominant than Serena Williams.”

What do other gymnastics legends say about Simone Biles?

Simone Biles is an athlete of the kind only born every few decades. No one in her industry doubts that she is the greatest gymnast of all time. Nadia Comaneci, perhaps the most elegant predecessor, is a fan. Svetlana Khorkina, another gymnastics legend, has been somewhat critical of Simone Biles throughout her career. Khorkina went as far as accusing Biles of doping.

Simone Biles is 1.42 meters tall and seems to be perfectly proportioned to the needs of modern high-performance gymnastics. Slim but powerful, explosive, and graceful. She is sometimes compared to swimmer Michael Phelps because his physique was also perfectly sculpted to win medals for America in the swimming pool. Or with Michael Jordan because of his inexplicable bounce. Or with Serena Williams because of her sheer power on the tennis court. Yet Biles jumps much higher than Jordan – about twice her height – and is more dominant than Williams. She wins many competitions by three or five points in a sport where distances are measured in thousandths. She succeeds in exercises that were considered unthinkable even for men. It’s almost like Serena Williams competing in men’s tennis and went 6-0, 6-0 every game for five years.

Has Simone Biles been a part of Texas’s “death camps”?

Simone Biles took part in the World Gymnastics Championships in Stuttgart, which may be her last World Championship. After the Tokyo Olympics, Biles turned 23 – and gymnastics years count fivefold. That’s how intense they put a strain on the body. The fact that she lasted so long is thanks to her perfect genes and the gentle methods of her trainers Aimee Boorman and Laurent Landi.

The training centers in Eastern Europe, China, and North America, which produce the most medalists, have the flair of penal camps. There, the boundaries between training and abuse become blurred. A gymnast texted Biles a while ago that her parents were making her diet crazy: get up at 5 a.m., swim, go to the sauna, then work out at just 900 calories a day.

The methods at the World Champions Center in Texas, the elite center for US gymnasts, were also considered questionable for a long time. After the Romanian coaching couple Bela and Marta Karolyi took over in 1999, the Americans won more medals than ever before. But the gymnasts compared the training environment to “death camps”.

How is Simone Biles’ training regimen different from other gymnasts?

Simone Biles was fortunate to find a coach who recognized her unique talent early on. For Aimee Boorman, it was clear from the start that Biles had to work differently than normally talented gymnasts. She rarely trains more than 32 hours a week and is allowed to choose what she eats.

A reporter for The New Yorker magazine was allowed to visit the Biles family in Houston and was amazed to find that Simone was eating pork and drinking Fanta. “Simone’s trainer allows her to laugh,” says Olympian McKayla Maroney. “It makes me extremely jealous.” Biles hasn’t attended a WCC class since she was upset when she returned home from a WCC class earlier in her career. The Karolyis had called her a diva.

In recent decades, American gymnasts have not only endured psychological and athletic abuse, but also sexual abuse. Larry Nassar, the national team’s team doctor, molested at least 250 girls. Nassar treated and sexually abused almost all of the gymnasts who trained with the national team between 1996 and 2016.

Female athletes had complained about Nassar since the mid-1990s, but the reports were ignored by USA Gymnastics, the National Olympic Committee, the FBI, and the universities where Nassar practiced. The doctor is now serving life in prison, but the institutions that enabled and covered up his actions still control the sport. USA Gymnastics declared bankruptcy last year to avoid claims for damages.

One of Nassar’s most famous victims was Simone Biles. She never spoke about the details of her case and, unlike many of her fellow sufferers, did not appear as a witness in court. But in August, after becoming the American champion by an incredible 4.95 points, she burst into tears. “I don’t want to cry,” she declared. “But it’s not easy coming here for an organization that has let us down so badly. We had a goal and we did everything to achieve that goal, did everything you asked of us. Even if sometimes we didn’t want to anymore. And you couldn’t even do your only job. The one responsibility: to protect us. You didn’t do that.”

Nassar destroyed dozens of promising talents. The fact that Biles survived probably also has to do with the hardening of her family history, which she describes in the biography “Courage to Soar”.

How was Simone Biles’ childhood?

Simone Biles was born in Columbus, Ohio in 1997 and when she was two years old, Child Services took custody of her and her three siblings. The father had disappeared and the mother sank into drug addiction and alcohol intoxication. Biles’ grandfather Ron and his second wife Nellie took in the children.

After a return to the mother failed, the grandparents adopted Simone and her little sister Adria. The two boys stayed with Ron’s sister. Simone does not maintain close contact with her brothers. The older of them was arrested in August and is suspected of having killed three people in a shootout at a party.

How did Simone Biles start gymnastics?

Simone Biles was lucky to have Ron and Nellie looking after her. When she was six, Biles joined a small gymnastics club in Houston and immediately discovered her passion for the sport. Thanks to her innate athleticism, she was able to stand exercises that no one in her age group would have dared to do. She lacked elegance, however, and found it difficult to control her power. In one of her first competitions, she jumped over the table without touching it and received zero points.

As late as spring 2013, Biles was having such trouble meeting the aesthetic requirements that Boorman pulled her out of a prep competition for the American Championships. She consulted a sports psychologist and took a crash course with Karolyi. A few weeks later she won the American Championships and has not lost in the all-around competition since.

Since Simone Biles has been doing gymnastics, the dynamic of this sport has changed more fundamentally than it has since the early 1970s. Back then, underage girls like Nadia Comaneci, who was 14 when she won the Olympics, pushed adult women out of the medal ranks.

Gymnastics suddenly had more in common with acrobatics than with ballet; therefore small, mobile bodies were required. The IOC has since raised the minimum age for Olympians to 16, but over the past decade, successful athletes have evolved into jumping machines, whose bodies combine the flexibility of a child with the strength of a decathlete. This trend has accelerated since the International Gymnastics Federation (FIG) introduced a new grading scale in 2006 that rewards risk and difficulty over artistic expression.

Is Simone Biles the greatest gymnast of all time?

Simone Biles’ dance steps between jumps send chills down the spine of traditionalists. Elegance is not one of her fortes. She is more of an explosive athlete than a ballet dancer. But if you watch her jumps in slow motion on YouTube, you will scarcely believe that a human being is capable of performing them. Simon Biles seems to not be governed by the law of physics.

At the American Championships, Simone Biles wore a suit with a rhinestone goat’s head embroidered on the back. She didn’t refer to herself as an actual goat, but it was an acronym for “Greatest of all time”. So far, only Muhammad Ali has been allowed to claim this title without appearing arrogant. The great Ali would be proud to share the throne with Simone Biles.

The heights, widths, and difficulties of Biles’ sporting performances are unique. The US gymnast has so many spectacular things in her program on the floor, on the balance beam or during the vault – as she proved again these days in the Schleyer Halle in Stuttgart – that the spectators can hardly stop counting twists and somersaults. Triple double! Double double! Simone Biles is the best gymnast of all time and at the same time approachable and easygoing in her performances. For many experts and fans, the 22-year-old is the biggest active sports superstar on the planet after the retirements of Usain Bolt and Michael Phelps. However, after the Tokyo Olympics, when she pulled out of an event for mental health reasons, many people speculated that Biles was going to retire from the sport. While she has been away from the sport for some time now, Simone Biles hasn’t explicitly stated if she is retiring from the sport.

What is Simone Biles’ net worth?

As far as sports go, gymnastics isn’t one of the most financially lucrative ones like football, basketball, and tennis. However, if you are one of the all time greats who wins Olympic gold medals as if they are going out of fashion, you can actually make quite a lot of money in gymnastics. During the 2016 Olympics, all American medal winners received $25,000, $15,000 and $10,000 for gold, silver and bronze medals respectively. In those Olympics, Simone Biles grabbed four gold medals and a bronze. This netted her a handsome award package of $110,000. Since she has continued her dominance on the global stage, Simone Biles has built a good amount of wealth for herself. Simone Biles’ net worth is estimated to be around $6 million. And this is on the way up.

Shaun White’s Net Worth: Is He The Richest Snowboarder In The World?