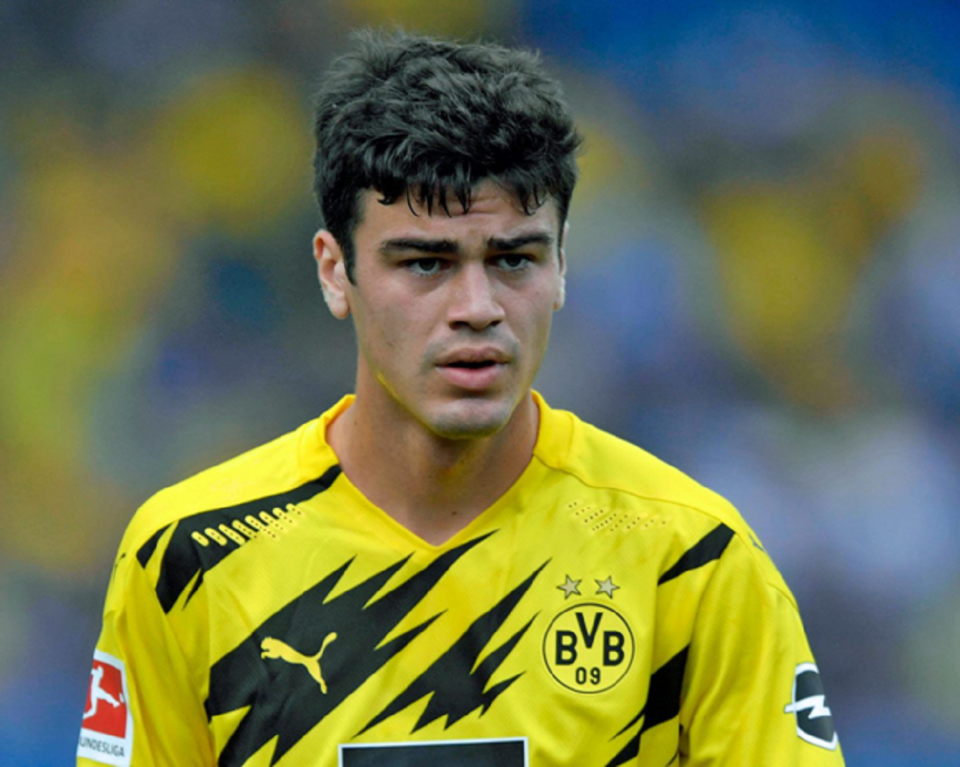 When it comes to what to expect from Gio Reyna in the near future, we can see that he is recovering well from his injuries and proceeding to find his way to the Qatar World Cup. For a more detailed look, let’s look at how he played this 2022 season!

Gio Reyna returned to play against his namesake:

Earlier this year in February 2022, Marco Rose, the coach of Borussia Dortmund, confirmed that Giovanni Reyna would make his return against Rangers, after leaving behind the illness that afflicted him and also knew the special bond that exists between the American and Van Bronckhorst.

“Gio Reyna will probably come back and I guess he wants to show his namesake Giovanni Van Bronckhorst what he can do,” said the German coach.

Here’s the story: Prior to the Europa League match between Borussia Dortmund and Scottish Rangers led by Dutchman Giovanni Van Bronckhorst, the coach acknowledged that there is a special connection between him and Gio Reyna.

A fact that draws attention prior to this confrontation is that Gio Van Bronckhorst, a strategist for the Scottish club, revealed the special bond that unites him with Gio Reyna and his family because during his time as a player he became a great friend of Claudio Reyna, father of the Borussia Dortmund attacker.

The friendship between the American legend and the historic Dutch player made Claudio Reyna decide to name his son in honor of his friendship with Van Bronckhorst, the story of the origin of Giovanni Reyna.

Regarding the match that Borussia Dortmund and Rangers will hold this Thursday, Van Bronckhorst acknowledged that it will be special for both him and Gio Reyna to meet in the competition due to the great friendship they have.

“We have always kept in touch and see each other at least once a year. It is a special bond that I have with the Reyna family and it will be special for both of us to play against each other,” the Dutchman added.

In the ranks of Borussia, Gio Reyna is one of the young promises with very high potential. The young American wishes for his part, to grow within the German club and the club will help him by not loaning him to any team. The club received tenders, but all were rejected.

Borussia Dortmund has always been able to do it with its most talented players. In addition to all the gems it manages to bring out in Europe, the German club is a specialist in enlisting its young talents at a very good price before selling them for more, as we saw with Haaland and Sancho.

American playmaker Gio Reyna was thrown into the deep end during the 2020-21 season before becoming one of the big surprises in the Bundesliga, with figures that speak for him in particular. Seven goals and six assists in 46 appearances, statistics have captured  the attention of all of Europe. However, the player’s main objective is to continue to progress within  Signal Iduna Park and his club has made it easy for him.

According to Borussia, a clear message comes from the management to the coach, Edin Terzic, who wants to give him a bigger role on the pitch. Many clubs have approached the Germans for a loan, but the response has always been negative.

According to the former US international Brad Friedel there comes a time when Gio has to take the next step in his career, and Reyna’s obvious potential is already being noticed by top teams across Europe.

Could Reyna follow in his father’s footsteps and play for England? Friedel thinks he does: “Gio could play in the Premier League. When you get to the Premier League, there is a learning curve because of his physical nature. Could you get used to it, adapt and thrive? Absolutely”.

“He can sit back and do the defensive work, handle the pressure, if that’s what his team’s system asks him to do. He has the tools to do all of that.”

According to Brad Friedel: Gio Reyna “can go whatever he wants to go and be whatever he chooses”. Interesting for someone with so many injuries?

On one hand, Brad feels that Gio would not look out of place at Real Madrid or any other Premier League club if a deal materialized for a transfer, but also admitted that he suffers from too many injuries. In an interview with GOAL, former US goalkeeper Friedel said that the biggest issue with Reyna will be avoiding injury: “He also needs to stay in shape. He has had some problems. But he has done very well. Basically, from the first moment he left [for Germany] he has done well and everything went from strength to strength”.

For now, the 19-year-old is very focused on the present and coming back from his latest injury. He wants to be fit again for the second half of the Borussia Dortmund Bundesliga season and the US national team’s bid to qualify for the 2022 World Cup in Qatar.

Could Gio Reyna end up at Real Madrid?

Along with the inevitable links with ambitious Premier League sides, Reyna has also piqued the interest of a La Liga giant: Real Madrid. This is because he sees Gio’s next destination to be one of the best clubs in the world.

“He’s already used to a big club, so that wouldn’t be a problem,” Friedel said. “I imagine that if he ever left Dortmund, he would go to another very big club, he would just seem normal to him and not be overwhelming. “

It has been suggested that Real Madrid could target him as a long-term successor to Luka Modric, and even Brad spoke of that great comparison: “They are different. Gio would need to play a lot more games to be able to control the tempo of a game like Luka Modric because. Luka is one of the special midfielders who can play anywhere on the pitch. He can control an entire game with his passing: pick up the pace, slow it down and it doesn’t even look like he’s running. That is something that is not taught, it is not trained, it is only in his footballing brain”.

If Gio plays many more games to get there, I think he has the quality for that, said the former US goalkeeper.

The first American with 2 assists against Denmark:

Returning from injuries, on September 6, 2022 and most importantly despite the few minutes of Gio Reyna, the American footballer has collaborated with two assists, both in the match against Copenhagen of Denmark, in the 3-0 victory that the Teutonic team obtained. This became the first time an American player gave two assists in a Champions League match in a 3–0 win against Copenhagen.

One month before the Qatar 2022 World Cup, Gio Reyna ends his drought:

By scoring with Borussia Dortmund after 421 days, the 19-year-old American seems to have put his injuries behind him and is slowly getting back to his best self.

Everything seems to indicate that the United States is beginning to recover one of its greatest jewels, a fact that represents great news for Gregg Berhalter. The 19-year-old American received the confidence of Edin Terzic, who decided to include him in the starting eleven that he received at Signal Iduna Park against Stuttgart, a team that was beaten by the ‘Black & Yellow’.

Playing against Dortmund, the USMNT team showed one of his best performances in the Bundesliga in a long time – It was in the 44th minute of the match when Reyna took advantage of a great collective play by the Dortmund offense and with a great cross shot beat the Stuttgart goalkeeper to celebrate his first goal of the season and his first goal in more than a year with the german team.

In addition to collaborating with a goal, his participation was highlighted by generating and contributing to the team’s offense because it took 421 days for Giovanni Reyna to score a goal again with the Borussia Dortmund shirt in the German Bundesliga. The last time this happened was on October 27, 2021, when the North American team scored in the victory against Hoffenheim.

Berhalter smiles ahead of Qatar 2022:

While the USMNT coach continues to define the final list for Qatar 2022, and the starting eleven that will start against Wales on November 21, some footballers are beginning to give the Team USA coach enough arguments to line them up in the said match.

One of them, Gio Reyna who went against Stuttgart showed that if he is healthy, he is a player who can make a difference, which is why some experts and fans in the United States have already begun to comment on the great moment that Reyna is living after beginning to recover to become his best version.

Some FAQs about Gio Reyna:

Who is Gio Reyna?

Giovanni Alejandro Reyna is 19 years old and a Verenigde Staten footballer who usually plays as a central midfielder.

What happened to Gio Reyna?

One of the great concerns for the United States team before the 2022 World Cup in Qatar is the health of Giovanni Reyna, an attacker who has suffered from injuries in recent months.

The alarms went off after he was crying in pain during the match in which the United States equalized goalless against Saudi Arabia.

Who is Gio Reyna’s father?

Talking about his family, Giovanni Reyna was born to his parents, Claudio Queen and Daniella Egan Reyna. Interestingly, both of Gio’s parents played professional soccer during their time. For example, Claudio has played for UK-based clubs like Rangers, Sunderland, Manchester City, and the US Men’s National Team, while Daniella has played for the US Women’s National Team. Moreover, Reyna is the second oldest among the four siblings.  To explain, the 19-year-old has an older brother Jack Reyna and two younger ones Joa Reyna and Caroline Reyna.

Gio and his father are living in Germany while the rest of the family is back home in the US.

Giovanni Alejandro Reyna, also known to his fans as Gio Reyna, came into this world on November 13, 2002, in Sunderland, England. However, young Reyna had to move away from England at a very young age because his father, Claudio, decided to sign for the New York Red Bulls.

Thereafter, he spent his entire teenage years at the academy, making himself one of the nation’s top prospects.

In fact, Giovanni even helped his youth team win the 2017 Generation Adidas Cup and receive the tournament’s best player award.

Added to this, the 17-year-old also helped the US U15 to the prestigious Tournoi Des Nations Cup Victory. A host of top European sides wanted to sign the young wonderkid not only because of his huge potential but also because he was a free agent.

But in the end, it was German giants Borussia Dortmund who managed to secure the talented 17-year-old in January 2020.

Manny Pacquiao Net Worth: How Much Did The Filipino Phenom Earn In His Career?