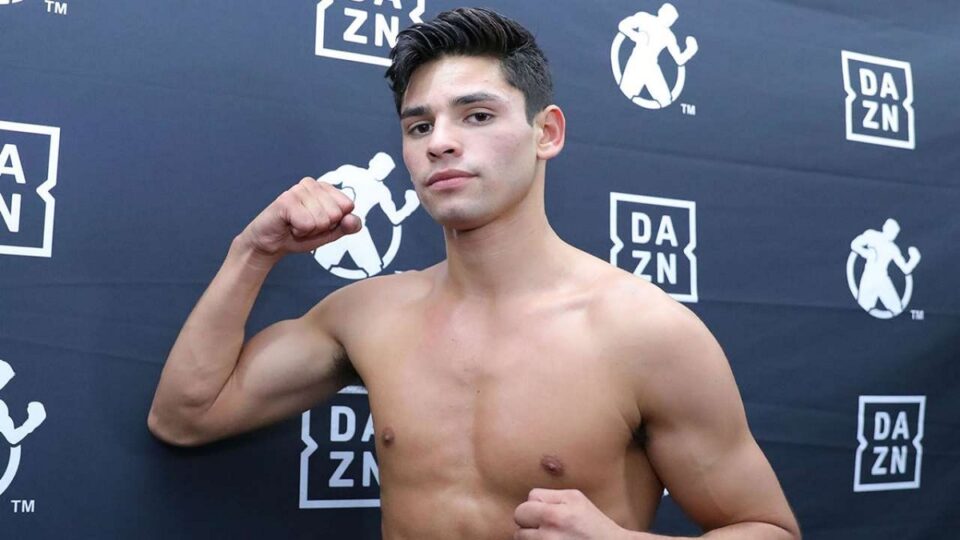 Ryan Garcia is a 23 year old boxing phenom who has achieved a lot in the boxing world at a very young age. He has already won the World Boxing Council and the World Boxing Organization belts in the lightweight category(135 to 140 pounds). He is currently ranked as the world’s sixth best lightweight by The Ring magazine. He is still undefeated and has achieved 18 of his 22 wins via knockout. Aside from being a successful boxer, Ryan Garcia is wildly popular on social media as well. He has a lot of followers on Instagram and Tiktok and keeps giving his fans lots of interesting content to see. In this post, we will find out more about him. Let’s get started.

Ryan Garcia: All You Need To Know

Who is Ryan Garcia?

Ryan Garcia was born in Victorville, California on August 8, 1998, is the son of Mexican parents, Henry and Lisa García, who migrated to the United States a few years ago in search of a better life opportunity. Ryan Garcia has been associated with boxing since a very young age. He is of Mexican descent, at a young age he is already nicknamed ” The New Golden Boy “, because he has shown his qualities in the lightweight and super featherweight categories. In 2016, he debuted as a professional boxer and his parents have supported him in his career ever since. His father Henry Garcia, is one of his trainers, while his mother, Lisa, takes care of all his business projects.

Who are the siblings of Ryan Garcia?

Ryan Garcia’s sisters are Demi, Sasha and Kayla, while his younger brother is named Sean García. Sean is also a professional fighter at only 20 years old, although he has only had five fights in the featherweight category, in which he has an undefeated record until now. by way of knockout. The Garcia family is undoubtedly a family with a lot of potential inside the boxing ring.

How did Ryan Garcia get started with boxing?

The story of Ryan García in boxing is the closest thing to a love story between a boy and a sport. Ryan Garcia started to take first steps in this discipline with his father, in the garage of his house. His great passion and fondness for boxing led him to become a category amateur athlete with 15 national titles under his belt.

At the age of 16, he became a silver medalist in the national youth Olympics and from there practically marked what would be the future of his career as a professional in the ring, a story that is just beginning and that has already accumulated 22 wins without defeats, 18 via knockout (most in the first round).

His first fight as a professional was on June 9, 2016 against Edgar Meza and he won by knockout in the same first round. On September 15, 2017, already with a record of 10 wins, all by knockout, he faced Miguel Carrizosa and starred in his fastest knockout by beating his opponent 30 seconds after the opening bell, from there it was known that the story of a future boxing star was beginning to be written.

What is the name of Ryan Garcia’s wife?

Ryan García is married to Catherine Gamez and in 2019 his first daughter was born, whom he baptized with the name of Riley García.

His life as an athlete has involved audiovisual productions, since the same year his daughter was born, he starred in a Brat TV web series and is currently very active on social networks, especially with his official TikTok account: kingrygarcia.

Ryan doesn’t speak Spanish, so his father also doubles as his translator for interviews. The boxer himself recognizes himself as Mexican and is proud to carry the colors of our flag in every batt

Who is Ryan Garcia’s new coach?

In February 2022, “The New Golden Boy” reported that his new coach is Joe Goossen, whom he already knows, since they trained together when the boxer was just 17 years old. Goosen turned 68, but is famous for training his pupils in a very aggressive style. He is recognized for shaping the careers of brothers Gabriel and Rafael Ruelas, Diego Corrales, Joel Casamayor, Riddick Bowe, Shane Mosley and John Molina. They have set up camp on Coronado Island in San Diego, where they both prepare for their next match.

Next to him is usually Ryan Garcia’s father, Henry Garcia, who has trained his son since he was a child. “I have told Ryan that I am here with him, 120%, not 100%, but 120%. When we’re in talks, it’s not just about boxing, it’s about life in general,” Goossen recently told the Los Angeles Times. His new trainer has all the time for Ryan, although they also talk about other issues outside the ring. This helps so that the fighter does not fall into episodes of depression, like the one last year, which forced him to retire for a while.

Why did Ryan Garcia split with his coach?

A fundamental part of the Mexican American’s career has been his corner, although this year he made a change by separating from the Canelo Team. Let’s find out why Ryan Garcia left his coach Eddy Reynoso. In early 2022, Garcia surprised everyone by announcing a team change. This caused annoyance in the Canelo Alvarez camp, who defended Eddy Reynoso, and incidentally, sent a message to the young boxer, who was said to be like his son. Speaking of the termination, Ryan Garcia’s father said, “Eddy and Canelo were amazing, but we decided it was time to make our own way, work our own way, build our own legacy. It is what we are doing now”.

Ryan Garcia’s father was in charge of announcing to the Canelo Team that they would not continue with them and then Ryan explained the situation, arguing that Eddy did not have time for him and that led him to make the decision to write his own story. Upon hearing those words, Saul “Canelo” Alvarez immediately reacted: “I do not know what happened. I don’t know what you’re thinking. He says that he wants more time, right? Eddy has all the time for him (Garcia). Eddy was here for Christmas (2020), and New Year’s (2021), all for him when he fought Luke Campbell (on January 2, 2021). Then what happened, something with him, I’m not sure.” In the end, he hinted that Ryan is not disciplined because he did not go to training every day.

Which are some of the titles won by Ryan Garcia?

To date, Ryan Garcia boasts of 22 fights in his professional career, all of them have ended in victory, 18 have been by way of knockout. His first fight was in 2016, when he defeated Edgar Meza in Tijuana, Mexico. A year later he got his first international title at the MGM Grand Marquee Ballroom: WBC-NABF Featherweight Championship WBO NABO & NABF Super Featherweight Belt WBO NABO and WBC Silver lightweight title Vacant interim WBC lightweight world belt. García put his career on hold in June 2021, this was caused by his battles with depression. This resulted in him not being able to vacate his titles and he had to vacate them. In 2018, Ryan joined the Canelo Team, making Eddy Reynoso his new trainer. Since then he began a friendship with Saul “Canelo” Alvarez, the champion who defended him on many occasions.

In February 2022, García announced a change in coach. He decided to go back to Joe Goossen, who coached him from his childhood. Also, his father would be part of his corner again. The controversy began when the boxer of Mexican blood said that Eddy did not show up for training and that did not go down well with the Canelo Team.

Ryan Garcia made a victorious return to the ring at the Alamodome in San Antonio, beating Ghanaian Emmanuel Tagoe in a unanimous decision without a doubt. However, the Californian was the center of criticism for his performance, especially related to the fact that he could not knock out a rival of a considerably lower ranking.

It is true that García has inherited a good part of the haters that Saul “Canelo” Alvarez and Eddy Reynoso have, precisely because they have been part of the team for a long time. Because judging by his performance, despite not having knocked out his opponent, there were no real cracks in his armour. He was an absolute dominator from the first to the last round.

Boxing legend Oscar De La Hoya did make a positive assessment of the Californian’s presentation after more than a year of inactivity, long months in which he had to deal with problems of depression and anxiety, added to a wrist surgery that had to be performed after suffering an injury in training camp. And the Golden Boy especially highlighted a conditioning factor that, in his opinion, made Garcia become a great boxer.

“I’ve always said, as a fighter and now as a promoter, that you’re not a real fighter unless you fight in front of this San Antonio crowd. I remember we promoted Canelo against Austin Trout here. Now we brought Ryan Garcia here and look at what happened. People here love Ryan, ” he said in an interview with BoxingScene.

Oscar De La Hoya did not ignore the criticism that Ryan Garcia’s performance generated from a considerable group of fans. In this regard, he pointed out that this is what happens to great fighters. “There are those who support the best and those who throw themselves against the best. When you are special, you have the best of both worlds. Ryan has critics who want to see him lose, but even more fans who want to see him win,” he opined.

The 22-year-old American was in control when his left fist slammed into Campbell’s right side to send the English fighter to one knee with 1:58 left in the seventh. Campbell was unable to get to his feet and Garcia remained undefeated with 18 knockouts in 21 fights.

Campbell (20-4) dropped Garcia with a left hook in the second round but didn’t land many other punches, while Garcia was the more aggressive fighter until the decisive blow.

The fight was postponed for a month due to Campbell testing positive for COVID-19. It was held in Texas due to coronavirus restrictions in California, Garcia’s home state.

“I had never fallen in my life,” admitted Garcia, a star on the rise and who has a large number of followers on social networks. “I think I got very emotional at the time.”

Campbell had lost both of his previous title fights after taking home gold at the 2012 London Olympics. It was Garcia’s first non knockout win since a unanimous decision to Carlos Morales in 2018 and was considered disappointing.

Most recently, Oscar De La Hoya has been trying to get Tank Davis to fight Ryan Garcia and has offered millions of dollars to the former for it.

Manny Pacquiao Net Worth: How Much Did The Filipino Phenom Earn In His Career?