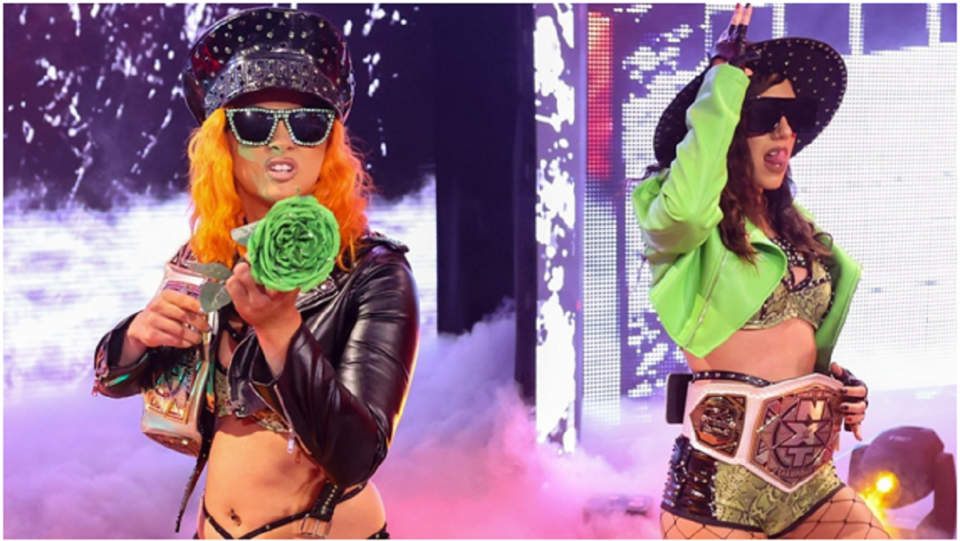 Gigi Dolin (also known as Priscilla Kelly) is a bright and shining young WWE Superstar who has taken the WWE and NXT by storm. Gigi Dolin appeared on both NXT and Smackdown and held the NXT Women’s Team Title on two occasions (with Jacy Jane). While Gigi Dolin’s initial WWE character was based on a gypsy theme (inspired by her role in My Big Fat Gypsy Wedding), the creative team reinvigorated her character with a more gothic theme. She calls herself “Hell’s Favourite Harlot” now. Gigi Dolin has drawn comparisons with former WWE Superstar Paige who also had a gothic appearance. Let’s look at these facts about the one and only Gigi Dolin!

When WWE announced three new signings for the NXT women’s division, fans were really excited to get a fix of Zoey Stark (Lacey Ryan), Gigi Dolin (Priscilla Kelly), and Cora Jade (Elayna Black) in the gold and black brand. The three arrived to reinforce the women’s division ahead of the Dusty Rhodes Tag Team Classic.

Gigi Dolin and Cora Jade were brought together by WWE to participate in the classic tournament together. The two debuted on the 205 Live show facing The Way (Candice LeRae and Indi Hartwell). Jade and Dolin ended up losing after just over five minutes of combat, falling in the first round of the Dusty Rhodes Tag Team Classic.

For Jade, the 205 Live match was her actual WWE debut, while Dolin had wrestled for WWE in the past. Dolin participated in the second edition of the Mae Young Classic where she lost in the first round to Deonna Purrazzo.

Cora Jade was scheduled to return to the independent circuit for a match at GCW. The fighter then changed all her profiles on social networks and announced through her Twitter account that she will finally not be able to participate in the event.

The two fighters made their joint entry, which indicated that they could work as a tag team within the company. WWE does have a women’s tag team championship, however, they don’t have many actual teams within their roster. So it will be good for the belts to have some worthy competitors like Gigi Dolin fighting it out.

Gigi Dolin is one of the few professional wrestlers who have been in AEW before signing with WWE. In Tony Khan’s company she had a couple of appearances, the most important being when she lost to Britt Baker.

3.   Gigi Dolin is a part of Toxic Attraction:

Focusing on the subject of Wrestling, Gigi Dolin is a superstar who began her career in the new NXT 2.0 teaming up with the other new prospect Jacy Jane, shortly after she allied herself with the WWE superstar who already had experience in RAW, SmackDown and now back in NXT, the current champion of NXT, Mandy Rose.

The three together formed the Toxic Attraction team and carried all the women’s titles of the multicolored brand. One of the few occasions that a single faction has held all the titles on a show (Evolution did it with Triple H as the World Heavyweight Champion, Randy Orton as the Intercontinental Champion, and the team of Ric Flair and Batista as the Tag Team Champions).

Curiously enough, Jacy Jane and Gigi Dolin did not defend the title for three months since they obtained it in the episode of NXT Halloween Havoc. They were eventually involved in the War Games fight though.

The indies lend themselves to everything, the most radical fights use elements that no one would have imagined and the day that Gigi used her tampon to attack her opponent, the internet exploded. The controversy reached important names in the industry, some criticizing it and others defending it.

At the age of 14, Gigi Dolin was the centre of attention in the first season of “My Big Fat Gypsy Wedding”. In the show, Dolin was looking for a husband, however, that was not the case, it was all part of the plot in these written shows.

Gigi Dolin’s first relationship with WWE was before NXT, her official debut in the company occurred in the 2018 edition of the Mae Young Classic. In her only match in the tournament, she lost to Deonna Purrazzo.

Gigi is in the middle of her second decade and consequently is one of the youngest in NXT, which is why she currently holds the record for being the youngest fighter to win the NXT tag team championship.

8.   Gigi Dolin has a big following on social media:

One of the brightest young superstars of NXT, Gigi Dolin has surprised fans through her social networks, igniting attention with shocking photos showing her physique. Her posts exceed 50 thousand likes and she has managed to become very popular.

At EVOLVE, Gigi Dolin played valet to Theory, when Theory went on a sizable losing streak, he switched to Heel and brought in Dolin as his support. This union allowed Theory to have better luck and win some championships.

In 2018 and within just a few months of romance, Darby Allin and Gigi Dolin got married, a marriage that lasted two years and ended well since both remained very good friends since then. In an interview, Gigi confessed that they made the mistake of getting married very young and that the “tag” of marriage was very heavy to carry, so after officially ending the union, the relationship between the two improved a lot again.