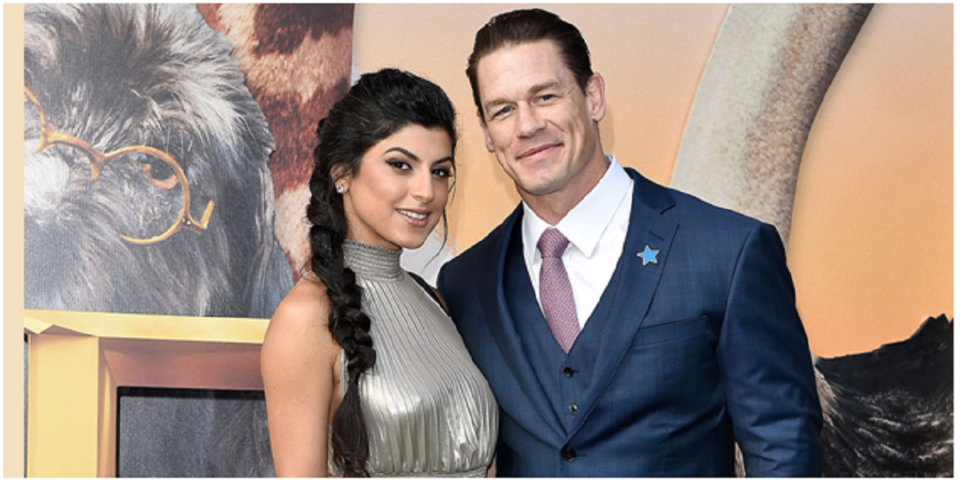 If you are a fan of pro wrestling or high budget Hollywood blockbusters, you are more than likely to be familiar with John Cena. Now whether or not you have “seen” him is another matter altogether. The WWE legend always claims “You Can’t See Me” during his bouts so we don’t know if we have ever seen the real John Cena. Of the few people who might’ve actually seen John Cena, his wife Shay Shariatzadeh is definitely the one with the most access. John Cena was married in the early 2000s and had a high profile romance with another WWE superstar Nikki Bella for a long time. However, that relationship eventually fell apart and both John Cena and Nikki Bella moved on in life. John Cena has recently married an Iranian girl living in Canada and has become more popular than ever among his Iranian fans. Shay Shariatzadeh is the lucky woman who has tied the knot with John Cena and in this post, we will find out more about her and we will also take a look at the history of John Cena’s previous romance. Let’s get started.

Shay Shariatzadeh: All You Need To Know

Who is Shay Shariatzadeh?

When was Shay Shariatzadeh born?

Shay Shariatzadeh was born in 1989 in Vancouver, Canada to Iranian parents. Shay Shariatzadeh is a civil engineer and identifies as a Canadian-Iranian. There is not much information about Shay Shariatzadeh’s family and parents, but according to unofficial sources, her mother works as a surgeon at a hospital in Canada.

Where did Shay Shariatzadeh study?

Shay Shariatzadeh completed her studies in the field of electronic engineering at the prestigious University of British Columbia in Canada. After that, she worked in a company called La Vie En Rose as a sales assistant, and after working in this company for some time, she went to another company called Alpha Technologies, where she started her career as an application engineer.

What happened between John Cena and Nikki Bella?

John Cena and Nikki Bella announced in April 2018 that they had called off their wedding, which was scheduled for May. On the one hand, this news, which came a year after Cena popped the question at WrestleMania, was shocking, but for many people who had followed the couple’s relationship closely, it wasn’t a shock as there was ample evidence of relationship problems.

It was on April 15, 2018, that Cena and Bella announced their decision to separate. The announcement came in the form of a post on Bella’s Instagram page.

“After much contemplation and six years of being together, Nikki Bella and John Cena today announced their decision to separate as a couple,” the statement read. “While this decision was difficult, we continue to have a lot of love and respect for one another.”

Cena seemed devastated on social media. After the announcement, he posted on Twitter, ‘Hardship, loss, and humility are extremely difficult waters to navigate, but perseverance through them builds a strength to withstand whatever life throws at you.’

Since his divorce in 2012, Cena had been vocal about the fact that he really didn’t want to get married again. ‘I don’t want marriage,’ Cena told Rolling Stone in 2016. “That’s me saying, ‘Hey, this is my life and this is how I’m going to live.

But Bella, who Cena began dating in 2012, was very interested in marriage, as was clear to anyone who watched the reality show Total Bellas. So there always seemed to be that tension in the relationship, and the two felt very differently about their future as a couple.

Cena said in interviews conducted as recently as the year before his proposal that he did not want to get married. So what happened? Well, after she popped the question, Cena said that he loves Bella so much that she changed her mind.

‘I found the right person,’ Cena said on Today ‘s In The Moment. ‘I found a strong person whom I consider an equal…it took such a strong person to change my outlook on life.’

The two also had mixed opinions about children. It wasn’t just that Cena didn’t want to get married; it is also that he never wanted to have children. Cena repeatedly said in interviews and on Total Bellas that he didn’t think he could spend enough time raising a child.

‘Look, I know I can’t stand raising a child.’ he told Rolling Stone in 2016. ‘It’s like with the dog. The most important thing to Nicole about the dog was: I love dogs, but I can’t help taking care of one. I have no time. And just because everyone else is happy with the kids doesn’t mean that’s how I have to live.’

Meanwhile, Bella really wanted to have a child, saying that she would feel like she was missing out if she didn’t. Cena once said on an episode of Total Bellas that ‘the one thing that scares me the most, if we get married tomorrow, and then you come to the conclusion that you want to have kids, you know where I stand. There is no way I would ask you to sacrifice anything for me.’

Nikki Bella realized that she couldn’t live without being a mom. This could have been the main factor in their breakup.

Naturally, after Cena proposed to Nikki Bella despite saying for years that he wouldn’t, the question became, had Cena changed his mind about having kids too? Or had Bella come around to the idea of ​​not having children?

It seemed that it was the last thing; Bella told people at the time, ‘I’ve made the decision to accept that I’m not going to be a mom. Now I can be a girlfriend and a wife, and I’m fine with that.’

However, the Total Bellas show suggests that after Nikki’s sister Brie had a baby, Nikki realized she couldn’t live without being a mother.

On the Total Bellas show, viewers actually managed to watch the breakup happen. Nikki Bella told Cena that she had figured out that she wanted to be a mom and he said that he understood.

This scene on the show actually took place in January 2018, but they only announced their breakup in April 2018. It’s unclear if Cena and Bella broke up for almost three months without telling the public, or if they ended up getting back together. but then broke up again.

Here’s a weird wrinkle in all of this: In April 2018, during a podcast interview, Cena actually said that he had changed his mind about wanting kids and that the wedding was still going on. Total Bellas has, however, suggested that Cena and Bella broke up in January 2018 because Cena didn’t want children while Nikki Bella did.

So there are a few possible explanations. One, Cena and Bella broke up in January 2018; then, sometime between then and April, they got back together, and Cena changed his mind about the kids, only to break up again in mid-April. This could be because according to the people, Bella felt that Cena was “clenching his teeth” on the way to the wedding.

Another explanation is that Cena and Bella actually broke up at the time of this April interview, and Cena spent the entire Blockers press tour lying about still being engaged. However, maybe he really meant what he said about wanting to have children, and was saying it to try and win Bella back. Cena would publicly proclaim that he is ready to have children in an interview on Today.

Nikki Bella needed time to focus on herself. Not long after the breakup was announced, Bella said on Living with Kelly and Ryan, ‘I realized I really needed to work on myself, because a better me is a better us.’

Bella also said that planning the wedding brought a lot of problems to the surface. “The day I say those vows, I don’t want to doubt, I don’t want to regret it,” she added. ‘I really want to be with that person until death do us part.’

We saw a bit more of this on Total Bellas, with Nikki saying on the show that she felt like she had become a ‘yes girl’ and had missed out on sacrificing so much for other people. Presumably, one of those sacrifices that she was talking about was deciding that she could stop being a mother to be with Cena.

Just a few weeks after the split, we started to get some evidence that the split might not be permanent. In a Today interview, Cena said that he is not walking away from Bella and really hopes that they can. ‘I don’t want anyone else. I have no more hope than maybe one day when we can figure it out.’

Shortly after, Bella herself said that this is possible. She told Entertainment Tonight, “John is an amazing man. He truly is the love of my life. I really hope that one day we can work it out and get back together. I think there is hope.’

She also told people that they are taking steps to get back together. “I told him to make a list and I have to make a list of what makes us so happy for the rest of our lives and what are the things that we want,” she said. ‘I don’t want him to ever live in regret. It is not a decision you can make very quickly. You really have to take some time for yourself.’

They were reportedly back together and working on their relationship, though People reported that Bella had trust issues because she was not sure if Cena had really changed his mind about wanting to be a father.

It all amounted to nothing in the end as both Nikki Bella and John Cena eventually moved on to other people for good. Nikki Bella went on to get engaged to her Dancing With The Stars partner Artem Chigvintsev. The couple had their first child on July 31st, 2020. John Cena went on to marry Iranian-Canadian civil engineer Shay Shariatzadeh in 2020. The couple hasn’t had any children yet but their marriage is going strong.