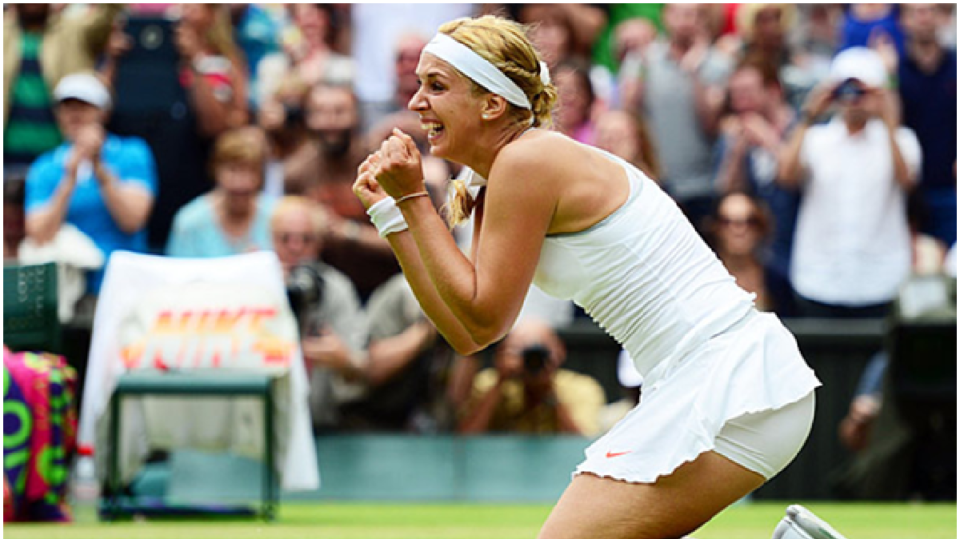 Sabine Lisicki is a popular German tennis player who had a meteoric rise in the tennis world and was being touted as the “next Steffi Graf” by many tennis pundits. She possessed an incredible array of skills and an absolutely devastating serve. She broke the record for the fastest serve in women’s tennis history when she served at 211 km/h. After reaching the Wimbledon final in 2013, the sky seemed to be the limit for the Teutonic tennis star. However, injuries derailed her career and she has tumbled down in rankings over the years. She is still playing, but her current ranking is 499 (her career high was 12 in 2012). In this post, we will find out more about Sabine Lisicki. Let’s get started.

Sabine Lisicki: All You Need To Know

The German Sabine Lisicki, former number 12 on the planet, is usually one of the most popular players in every tournament she participates in. There are many things about her which are quite interesting. Let’s find out about a few of them.

How did Sabine Lisicki get her lethal serve?

Sabine Lisicki credited her father for her incredible serve. Here’s what she said:”It really is a little secret between my father and me, because with his help I managed to improve that serve little by little, but, in a nutshell, he helped me generate a better serve every time I supposed I had the best one, but already it is something of both (the way to train it). And I am really very happy to have and have achieved this record and recognition that many speak of.”

Sabine Lisicki spoke on her grand slam ambitions and hopes. She said: “Really reaching those instances of a grand slam is something very hard. You must work very hard throughout the tournament and still know that each step that comes to you will be stronger than the previous one, so you cannot stop working hard to be able to continue in that type of competition.”

Has Sabine Lisicki thought about retiring because of injuries?

Sabine Lisicki was one of the most popular and successful players on the WTA tour at one point of time. But a slew of devastating injuries threw a wrench in her plans of dominating women’s tennis. This is what she said about retiring from tennis because of injuries. She said ”No, I love tennis very much and I will never think of giving it up, I will never give up and I will continue fighting against any circumstance that comes my way. But the hardest thing was one day I had surgery and it was very difficult because I was a bit delicate and then coming back was complicated for me, because I had to take care of my body, but I love tennis very much and I didn’t want to leave it; however, I evolved and now I am playing multiple tournaments.

This is what Sabine Lisicki said about the impact of Martina Hingis in her life: ”Many years ago I worked with her, she was one of my references, a very special person. She always told me that she had to work hard to be able to achieve things, we had a very good relationship and she was a very important company at the time for what she was experiencing.”

What does Sabine Lisicki feel about being compared to Steffi Graff?

Sabine Lisicki always felt blessed about being compared to the 22 time Grand Slam champion. Lisicki said: “Steffi Graff was an extraordinary tennis player, she achieved thousands of things in this sport, she is like a hero in Germany.

What did Sabine Lisicki say about the unpredictable nature of women’s tennis?

Speaking on the current state of WTA tennis, Sabine Lisicki said: “I think that the level of tennis is much better now, the tennis players are performing very well and they play very well. For example, before that performance was not so high and it was shown in the matches, many of the people who were in the top 5 always won 6-1, 6-1, but now it is not like that, now the level is very high, there are many people who play very well, they dominate the courts, they dominate the games, they dominate their minds and that has made the growth so great and nobody really understood that and they believed that they could stay at one point, but now that point already does not exist, because there is someone who will always overcome it.”

Why did Sabine Lisicki have a large fan following in the UK?

“I love playing at Wimbledon,” said Lisicki. “It’s an incredible feeling to have so much support. It is the most beautiful thing in the world,” she noted. In beating American Serena Williams in the quarterfinals, Lisicki was certainly unable to hold back tears of happiness.

Wimbledon and Lisicki seemed to be the perfect combination. It was not the first time that the German had caused a furor on the hallowed courts of the All England Club. In 2011 she was among the top four best players in the tournament. She was the first German tennis player to do so after Steffi Graf did it in 1999. Overall, Lisicki has reached the Wimbledon quarter finals four times.

What is Sabine Lisicki’s heritage?

Lisicki’s parents come from Poland and before the birth of Sabine, they moved to live in Germany. Richard, her father, studied history and worked for a time in Cologne as a tennis teacher. Her mother, Elisabeth, is an artist. At the age of 14, Sabine already said: “I want to be the best in the world”, as the couple recalls. Speaking of her parents’ contribution towards her game, Sabine Lisicki said: “My parents did everything possible. My dad has worked from eight in the morning until nine in the evening to make it possible so I can play tennis. We had to cancel tournaments because we couldn’t afford to go there.”

The young woman finished pre-university education, after which she devoted herself full time to playing tennis. She’s been on the pro circuit since 2006, but it wasn’t until 2008 that she started to make it by qualifying for the Australian Open. In October of that year, she played her first final, in Uzbekistan.

Half a year later she won her first professional tournament by winning in Charleston, United States. Since then, and although her trophy collection is not very large, she ranked among the top 40 best players in the world for some time.

Where does Sabine Lisicki stay?

Even though she hails from Germany, Sabine Lisicki is a long-time resident of Florida, where she trains with the legendary Nick Bollettieri. She is accompanied by her coach, her physiotherapist and her parents at the different tournaments in which she participates.

“This is the most important thing for me. We all hang out a lot, cook together and have fun. I think that’s why my level of play has gone up so much,” said Lisicki.

The tennis player hoped that this closeness will also have repercussions this Thursday in her matches to come.

When did Sabine Lisicki get the fastest serve in women’s tennis history?

The German Sabine Lisicki made the fastest serve in the history of women’s tennis in her match for the first round of the Stanford WTA against the Serbian Ana Ivanovic. By Ivan Tricarico.

Boom Boom did it. Although the 24-year-old Teutonic woman, who is ranked 29th in the world ranking, did not win in her presentation at the American tournament, which is played on hard courts, she made history by serving at 211 kilometers per hour, the fastest serve of all the times.

In this way, the German surpassed the mark held until yesterday by the American Venus Williams with a service of 207 kilometers per hour in 2007. However, the joy of the fastest serve of all time didn’t last long as she fell to Serbian Ana Ivanovic 7-6(2), 6-1.

Has Sabine Lisicki struggled a lot against Ana Ivanovic?

Not only with the debacle against Ana Ivanovic does Sabine Lisicki give a picture of the misery. She doesn’t seem fit, but ignores calls for someone like Felix Magath.

Sabine Lisicki is a happy person – with a heart-warming smile. So a lot must have happened when the Berliner took refuge in biting sarcasm.

During her memorable second-round defeat against Serbian Ana Ivanovic (0-6, 3-6) in Dubai, the time had come: Lisicki sat on the bench during a change of sides and could only smile mockingly at her desolate performance.

The  (then) 25-year-old should actually have felt like crying. 13 double faults in eight service games, not a single ace, and just a 27 percent success rate on her second service.

A record of horror for the service world record holder (211 km/h), whose permanent crisis is taking on ever more serious forms.

Lisicki, who is actually highly talented, lost four of her five individual games in 2015. Three of them in the third set. The hopeful who once dreamed of the tennis throne has become a problem child.

And a number of experts have long ceased to criticize behind closed doors about the apparently inadequate fitness level of the 2013 Wimbledon finalist.

When was Sabine Lisicki criticized for her lack of fitness for the first time?

“Bine”, (then) number 28 in the world, didn’t want to know anything about that. “My relaxation on the pitch just has to come back,” the passionate beaming woman had said almost defiantly after every new disappointment. And: “I have to find fun again. The focus must be on enjoying tennis.”

But that won’t be enough to get close to the top ten again. While her Fed Cup colleagues Andrea Petkovic (No. 10) and Angelique Kerber (No. 12) trained with their own fitness coach in the off-season, Lisicki seemed to underestimate the physical component.

The vicious circle is programmed: not fit, too late on the ball, bad shot, mistake, defeat, no self-confidence.

What was the proposed solution to Lisicki’s fitness woes?

Many believed that only a tough dog as a trainer can put Lisicki on the right path. “I think she needs a Felix Magath type grinder. One that doesn’t tolerate any excuses,” former professional Nicolas Kiefer said in Sport Bild. Fed Cup team boss Barbara Rittner was also of the opinion “that Sabine needs tough leadership”.

However, the subject of Lisicki and her coaches is a difficult one.

The Bollettieri student worked with a total of seven coaches over two years – including Martina Hingis and Wim Fissette, who, after world number four Simona Halep (Romania), has been coaching two-time Melbourne winner Victoria Azarenka (Belarus) for a few days.

How did Sabine Lisicki try to get her serve back?

Christopher Kas tried his luck with Lisicki. “We’ve gotten along really well since the Olympics,” says the American by choice who lives in Bradenton, Florida. Together, the duo narrowly missed out on winning the bronze medal in mixed in London in 2012.

However, the former Davis Cup player Kas was always considered a friendly fellow – at least he is not a grinder.

In training, Kas tried to give Sabine Lisicki a greater shot security paired with an aggressive game. Lisicki was not really able to implement this in the competition. The once formidable “Bum-Bum-Bine” serve was now just a thing of the past.