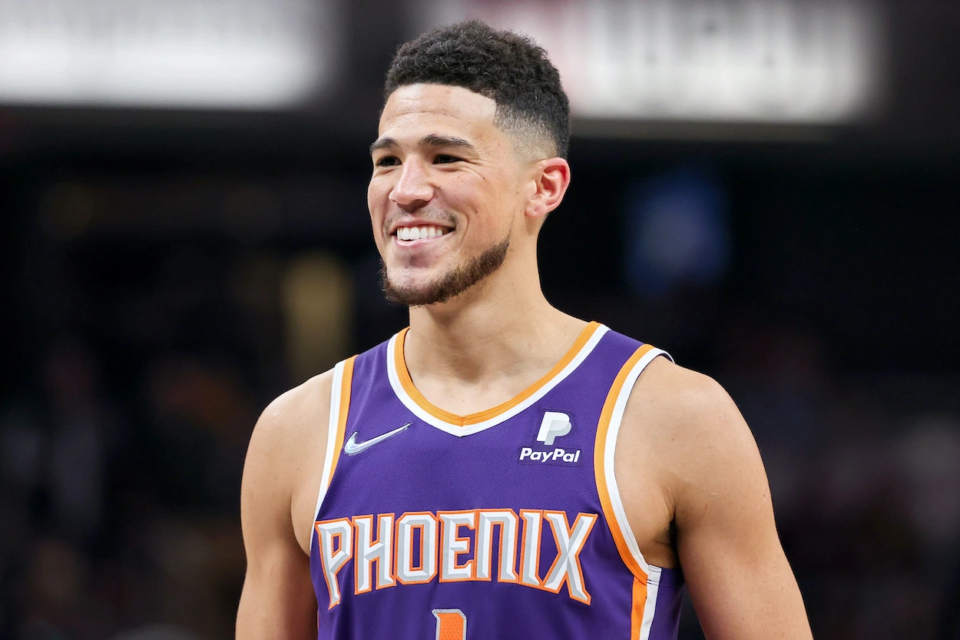 Devin Booker is a bonafide NBA star. A pure scorer, he has performed well enough in the playoffs to make the NBA Finals as well. He has made quite a name for himself in his brief NBA career. While he is probably not a “superstar” yet, he is definitely knocking on the door of superstardom. With more experience and some other key performances under his belt, Devin Booker should definitely be able to jump into the world of superstardom. Despite being in the NBA for a small period of time, Devin Booker has already made a good amount of money. In this post, we will discuss Devin Booker’s net worth and some important events of his career so far. Let’s get started.

Devin Booker Net Worth: All You Need To Know

What have other NBA Players said about Devin Booker?

The Phoenix Suns guard’s inclusion in the 2021 All-Star Game came after LA Lakers forward Anthony Davis suffered an injury and needed a replacement, via the NBA. The day before he was announced as a replacement for Davis, LeBron James and others took to Twitter to express their disappointment that Booker wasn’t included in the game’s original lineup.

‘Devin Booker is the most disrespected player in our league,’ James proclaimed. CJ McCollum of the Portland Trailblazers expressed the same sentiment. ‘Damn @DevinBook really didn’t make it? This is crazy,’ he tweeted. ‘Even we know Devin Booker is an All-Star,’ the Arizona Cardinals NFL team added.

The onslaught of public support for Booker showed the favorable impression he made on basketball fans. As the son of former professional basketball player Melvin Booker, Devin Booker endured early sacrifices to hone his skills in the sport. He left his suburban life with his mother to attend high school in an “urban environment” in Mississippi with his father. “It was a social setting that he needed to know how much he had blessed him because he was surrounded by a lot of kids with the typical urban story without a father in their lives,” his father told The Undefeated. “These were the things he needed to see that he hadn’t seen before,” Melvin Booker concluded.

What is Devin Booker’s net worth?

After more than five years in the NBA, Devin Booker had a net worth of $26.6 million, per Forbes. His earnings include signing the richest contract in Phoenix Suns franchise history worth $158 million over five years, as well as a $36 million salary for the 2023-24 NBA season. He was named one of the 100 highest paid athletes of 2020. He also landed an extended contract with Nike following his sneaker free agent status in 2019. Three years into his NBA career, Booker made history as the youngest player to ever drop 60 points in an NBA game. Even legendary scorers like Michael Jordan, Kobe Bryant, Kareem Abdul Jabbar, Karl Malone and LeBron James haven’t achieved this honour. Other career highlights include breaking the Phoenix Suns record for most points in a game as well as joining the ranks of Kobe Bryant and Wilt Chamberlain by becoming one of only six NBA players in history scoring more than 70 points in a game.

Although he’s not swimming in as many millions as some of his NBA counterparts, Booker isn’t far off the money given his high-profile romance with Keeping Up With the Kardashians star and global fashion icon Kendall Jenner. After a year of stoking dating rumors, Booker and Jenner seemingly confirmed their romance on Valentine’s Day 2021 with an Instagram Story (via Cosmopolitan ) the model posted with the Phoenix Suns player. The model’s sources shared how ‘happy’ she was with the All-Star player. As two young multi-millionaires, what’s not to be happy about? However, the couple has apparently broken up or is in an on again-off again relationship at best.

USA Basketball is a team that will never worry about getting superstars to participate in great events like World Cups and Olympic Games. On the other hand, different countries in Latin America always come to suffer with generational changes. Today, Mexico is one of those countries that is experiencing tragedy and moments of imagining the impossible occur in it. Such has become the universe of the mind, that on different occasions there has been talk of a man like Devin Booker wearing the colors of the Mexican National Team.

Booker, on his mother’s side, has dual nationality: Mexican and Puerto Rican. For this reason, the guard has been repeatedly questioned about his participation at the international level.

At first, he doubted his decision to participate in one of these two representations, but, with the growth he has achieved in the NBA, it seems that his path is already marked. In 2019, USA Basketball announced a list of 35 players available to participate in the 2019 China World Cup and the upcoming 2020 Tokyo Olympics; Booker is part of it.

“I’m not sure yet, it’s a difficult question. Being part of the United States National Team is what is on my mind right now, so I still don’t know,” the Phoenix Suns player commented to a specific question from Cancha Latina.

In turn, he added that the coming months will be key for the future: “(Playing for USA Basketball) has been my lifelong dream. It is one of those goals that you keep in your head during the summer and train to reach the highest level of basketball, that is to play in the Olympic Games.

Meanwhile, on his trip to Latin lands for the Mexico City Games, Booker returned for the second time and the energy is always different from the southern United States.

“I am very excited for the game. We’ve given the fans the show they deserve and I look forward to doing the same tomorrow (today). I am happy that they can see good basketball on their land”, added the 23-year-old. “The atmosphere is going to be great with all the energy that you get to experience here.”

Not everything is about the game, but also what is contributed to society by having the NBA close by. A clear example is Phoenix, which not only sees for the American community living in the city, but also for the Latino people who make up 40% of the 1,660,272 citizens.

“In Phoenix, we have a large Mexican population, so being part of this organization helps me connect more with my Mexican and Puerto Rican heritage. Every one of the activities we do around this has been incredible,” said the former University of Kentucky star.

Devin Booker scored 39 points last time in Mexico against the San Antonio Spurs, a team that he will not be able to repeat the dose on this new visit to the Mexico City Arena due to a right hand injury. Until the 2020 season, the San Antonio Spurs had the Phoenix Suns’ number, dominating the head to head matchups with ease. However, with Devin Booker’s stock and net worth rising every season, the Phoenix Suns will be one of the teams to beat in the Western Conference over the coming years.

Who Is Ryan Garcia’s Wife? Did He Finally Get Married? (KEY FACTS)